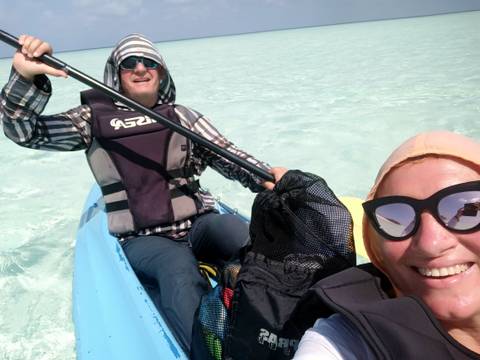 Even if its charter from island to island, time of departure will be floating. And price also.
We had information from two sources – speed boat from Thoddoo to Rasdhoo at 2pm ( 300 $); boat at 12 pm (200$). We made choose. Then time changed. Then again. Then we received the call that boat will be in half of hour, at 10-30.

The ocean was still choppy and rough.
It was little bit more then one hour till Rasdhoo atoll.
This place is completely opposite to Thoddoo.
Thoddo is single island in the ocean. Big and with vegetation.
Rasdhoo is absolutely round atoll looks like blue ring in the ocean. On this ring like on the necklace strung islands – big Kuramathy with resorts,  local Rasdhoo ( administrative center), two uninhabited, two big sandy bars and resort Villighandoo. 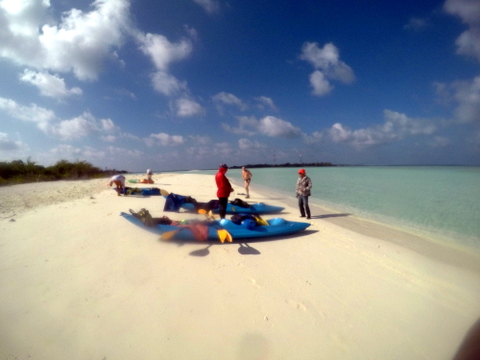 We lived on Rasdhoo.
This is very special island.

Rasdhoo is small. Actually, all islands on Maldives are small. But Thoddoo with its 2 km long and 1,2 km width was giant!
Rasdhoo is something as 500x600m

Rasdhoo is administrative center with hospital, school, police station ( the only car on the streets was police car). It has numerous souvenir shops. It has restaurant popular. It has ATM and its possible to pay by card everywhere. Any withdraw in ATM  costs 100 rupees (7usd). 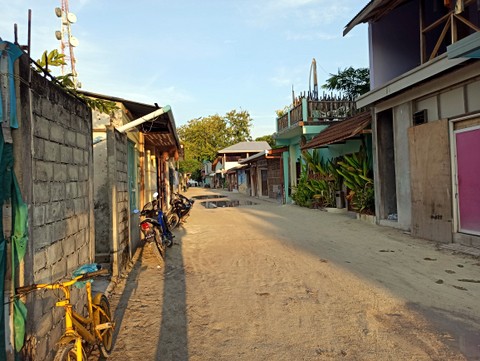 We lived in Madivaru Kro hotel. Two storey green building on the main street. Our room on the second floor with huge open terrace. On terrace there are sun beds for lazy relax and hammocks for super lazy relax. 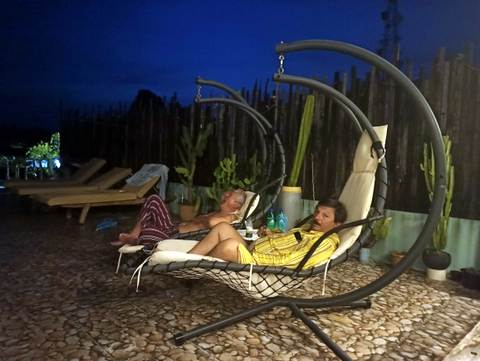 We put on the terrace table and had possibility in the morning took sunrise coffee . It were really our Happy Hours… In the evening we took here dinner accompanied by the screaming’s of the flying foxes. 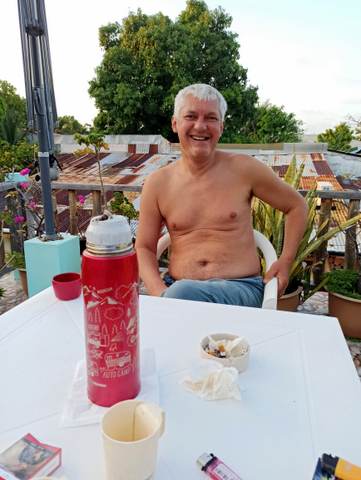 Terrace  by perimeter had numerous plants. It was our little paradise. But actually, its not our terrace – its a common space for all guests.

And in the morning, at 5 am, soft charming voice from the mosque asked Muslims go to prey. Then he sing suras. Soft strange song from Koran. We listen in silent. It was so beautiful. 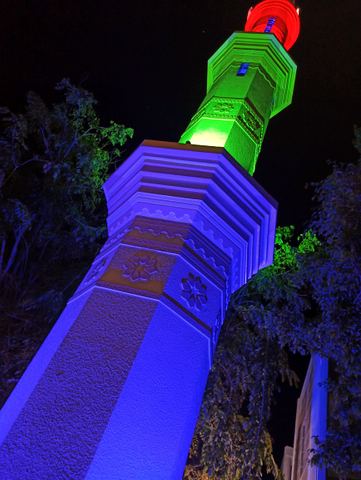 Rasshoo cannot brag about big bikini beach.  Beach is opposite Kuramathy in Rasdhoo channel.
We arrived  after storm. The beach was dirty, with plastic, the water was not clear. 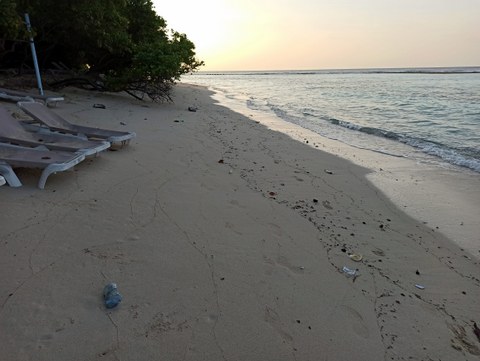 In two days all was ok. 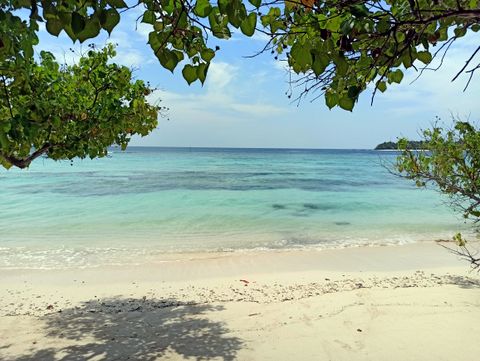 But this plastic, all this garbage which people threw into the ocean – then ocean return to people. All this plastic locals swept into big heaps, which are everywhere near the shore. And locals don’t threw garbage as I saw. They even separate all garbage – I was informed at first day where is plastic and where is food bins.
And now the big government program with additional international investing will start. The main idea to clean all islands and make bikini beaches bigger to attract more tourists.

Anyway. Bikini beach is small, narrow but with a lot of shadow between the trees and with amazing animal and fish  world. 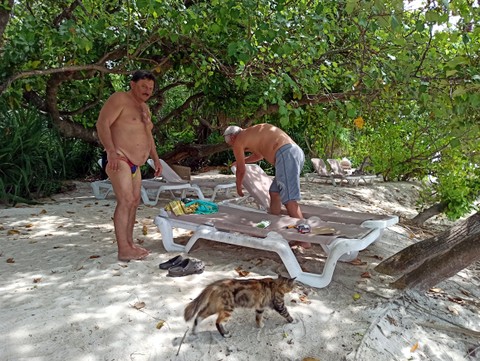 The water before the reef is very shallow. But its does not interfere for stingrays, eagle rays, baby sharks or big trigger fishes. Schools of fish are everywhere. Even in the water with depth 40 sm!
When the ocean calmed down, I started to snorkel on the reef along the channel. Here is the current. Its changed few times per day.
And tides all time go up or down. Current can be soft or strong as stormy wind. And here, near bikini beach , we saw all diversity of the Rasdhoo atoll except mantas. 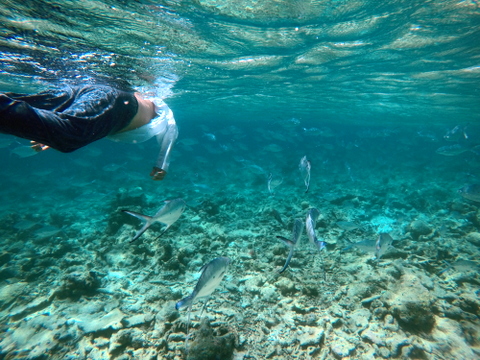 The main thing to do on Rasdhoo is diving. There are 8 dive centers here and more will be open.
Kinaan, owner of the Madivaru Kro also has his dive centre. Half- half with another person.
Dive sites here are perfect.
First one is Madivaru channel – underwater ridge with current between Rasdhoo and first uninhabited island Madivaru. I dived here may be 5 or 6 times. Every one was different, with different fish, current, visibility. But every time with a lot of emotions. 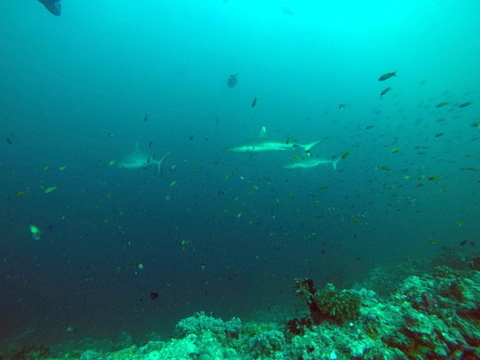 From the ridge we observed deep blue full of sharks, rays, barracudas , groupers and schools of hunting jacks. Sometime big tuna came. Once we saw huge Napoleon who live here in the cave. I gave him name Raboullione – as it was nick name of real Napoleon. Raboullione looked at me, wait, and slowly fly away. Then returned and give us possibility to be with him one minute more. On the sandy bottom we saw huge stingrays and boxer shrimp. On the ridge Thilla  show us leaf fish. Every dive was as event! 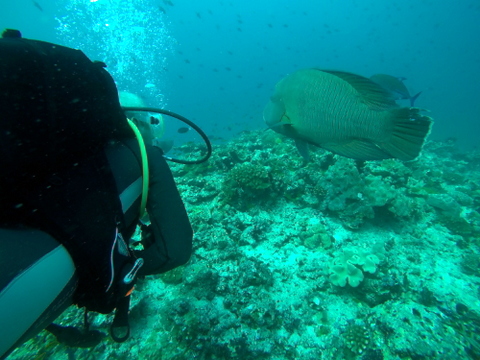 Another perfect dive spot is Rasdhoo channel. But its longer and deeper. Again with numerous fishes and sharks. But here my computer ask me all the time go upper.
Dives on Rasdhoo mostly deep, long and not easy.
Manta point this time hide from us its treasures. We tried to dive here two times. Location of the spot near the Northern pass into the Rasdhoo atoll. This mean waves. And both times waves were big. Not so big for normal boat, but big for our small boat. Mantas don’t like stormy ocean. They abandon atoll.
First time we didn’t make a dive. We change this spot to the wall near Villighandoo. Uncomfortable and dangerous stay near the boat in big waves. Hard get into the boat. And very simple wall without any miracles. Nothing special.
Second attempt to manta point was much better. The ocean again was rough.
We jumped down. Strong current. Depth of the point 12,5 m. First 20′ we lay on the sandy bottom. Then 30 min explore tiny space 3x3m.  It was enough time to became acquainted with all dwellers – manta shrimp, two giant tridactnas, two nudibtanches, spotted grouper ext.
And then manta came. After 50′ of waiting her. Only one. 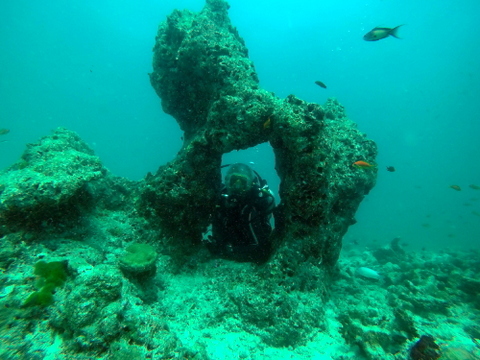 Snorkeling, diving, everything was good.
But there were also uninhabited islands. Excursions to this places were expensive. And we didn’t want to be depended of someone.
We rented plastic kayaks.
Double was stable. 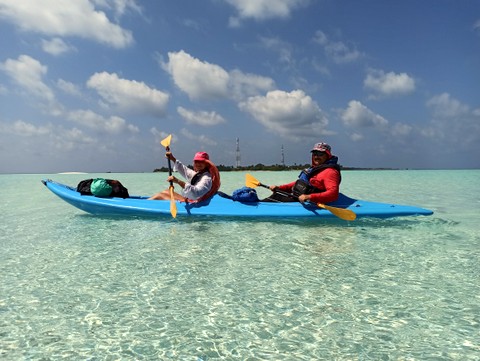 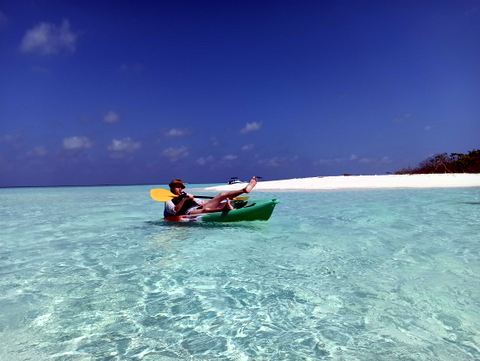 First we need to cross Madivaru channel. Its something as 800-900m. Little bit rough all time and with current. Then on the shallow part very blue and calm. 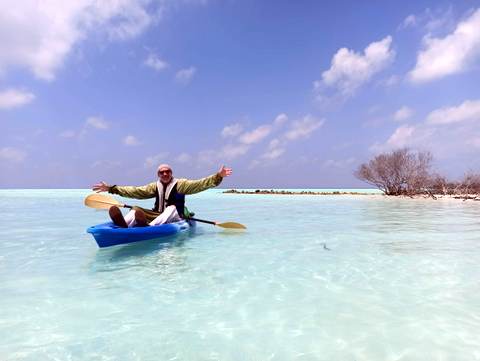 Madivaru island has perfect sandy beach and a lot of shadow. 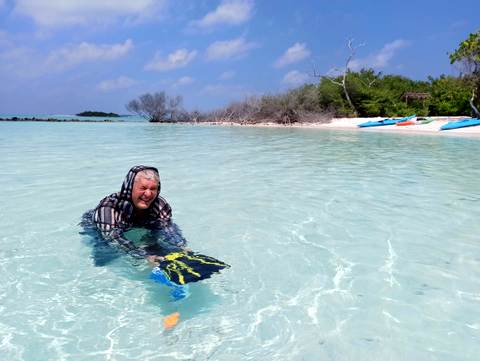 Inside this island there are some tables and even at midday here is strong breeze. Outside Madivaru is vivid reef with a lot of fish. Actually, its the same place where we have the best diving ( Madivaru channel). Big picnics with barbeque usually arranged here. 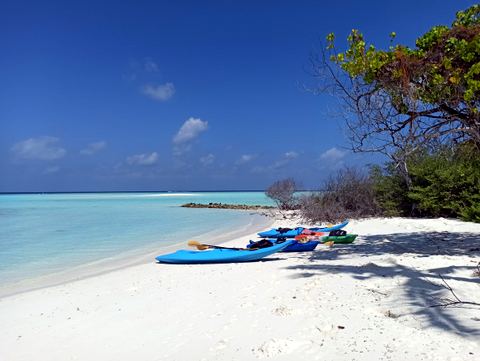 After Madivaru island by kayak in turquoise water we paddled to another uninhabited island. This second one bigger and all boats come here.  Small bushes and no shadow. 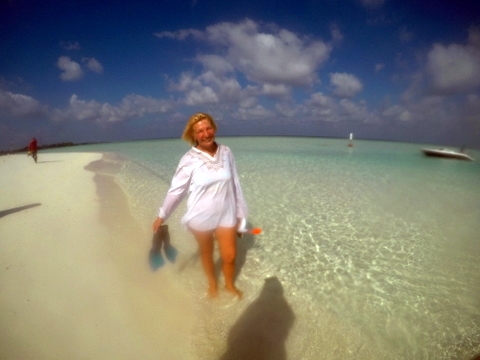 Just after this island starts Blue Hole. Completely magic place. In blue water its a big long spot of navy blue. White sand slowly go down to the 5m depth. Bottom is as flat as table. In crystal clear water a lot of different flickered fishes. Small and big ones. We saw trigger, tuna, jacks, stingrays on the bottom. Here its one big coral conglomerate full of  dwellers. 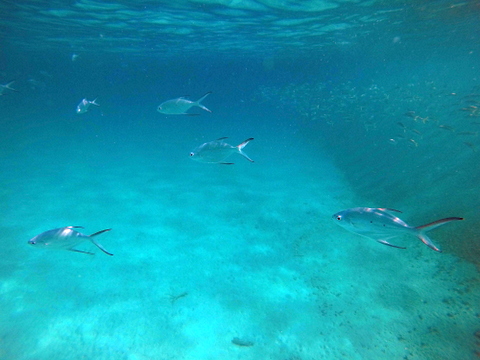 Those who want to make their PADI course come here. Its look like as natural swimming pool.
Amazing place! 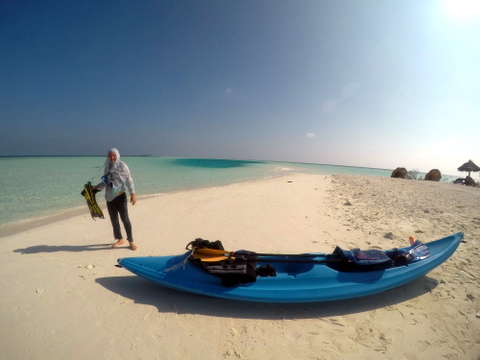 We had been here three times. Types of fish were different. We feed them with bread. Even trigger wanted to try. And of course, all fishes follow us as escort. 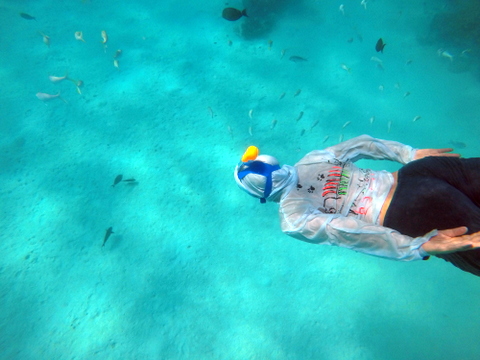 I liked to stay in blue water which temperature was 33°C! All day long with snorkeling breaks. Two pink peppered morays lived near the Madivaru. They like play with each other.
And sandy bars.
In blue water. 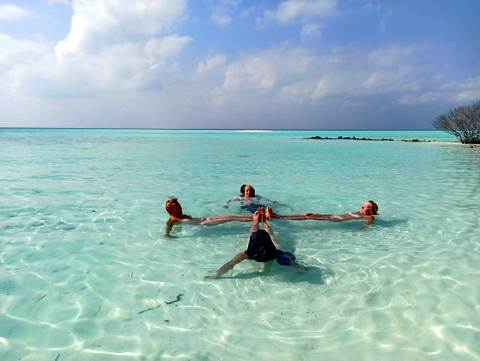 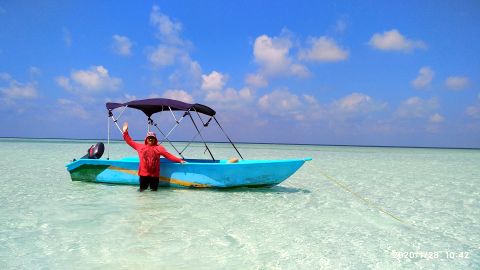 Restaurants on the island as usual not tasty, expensive and long waiting.
We ate our papaya from Thoddoo, bought kings mango delivered from Australia. For dinner I bought in supermarket tuna or shrimps.  In our hotel was small kitchen but fully equipped. 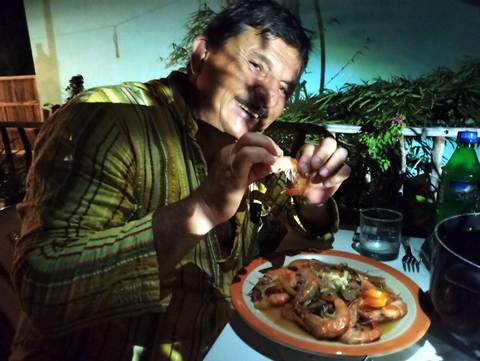 Time pass quickly.
Time to say good buy.
This paradise will attract me again and again. 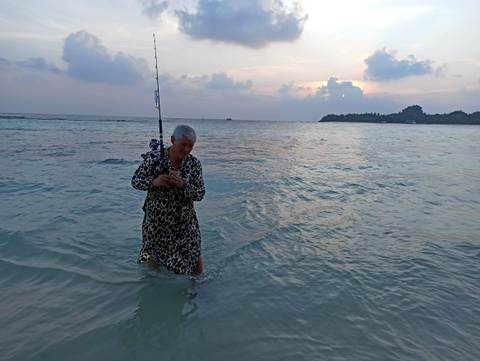