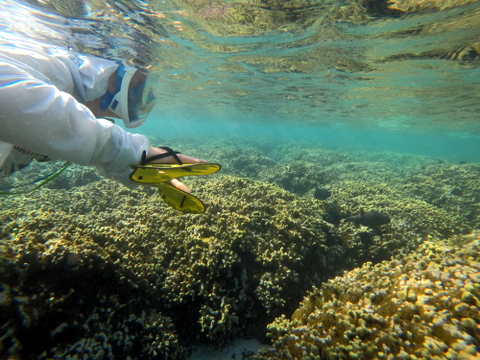 Its possible to rich Thoddoo from Mathivery by public ferry. Its cheap but long way. And not every day. Long mean -  one hour or more to Rasdhoo, waiting there all day and one hour to Thoddoo. Very cheap. Very long…

Little bit more then one hour – and we are approaching to Thoddoo. By speed boat. 325 usd. Can accommodate 25 persons.

First impression was awful – coast  covered with plastic. Plastic in the harbor… 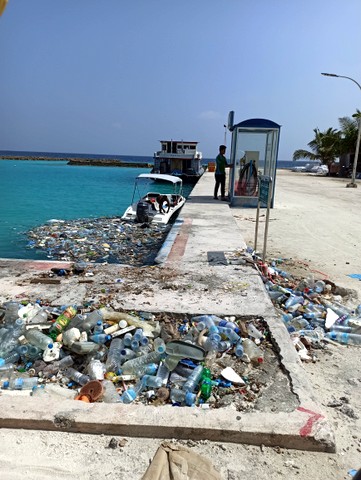 Long electocar-train met us in the harbor. I know were is our hotel, but don’t know where the hotel of other people. But we go another direction. May be excursion. Road near the ocean – ring road, its dirty. Heaps of garbage everywhere. Then we get into local part of island with  curved narrow streets. Stop. White palace between the betel garden ( first i think its  pepper lianas). This is our hotel. ????? Why? Where is our Serene Sky? Why not in touristic zone? Only questions. No answers. 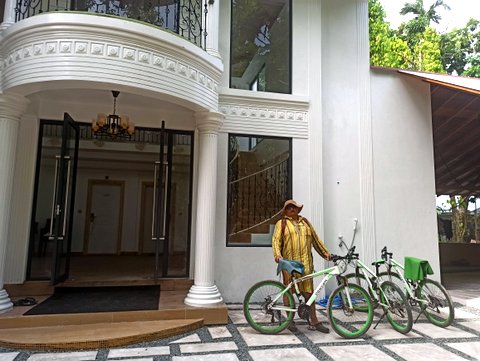 Car-train took our friends and escape. We are in the new hotel- palace with unfinished terrace, without kitchen and garden , which will be one day very pleasant. Our rooms are big, clean, modern, with excellent conditionering. Bathroom also huge and modern. One wall in the room is glass and it has French balcony. We have view into the street, garden and construction. But again – during all our stay curtains were closed.  We use balcony as dry area for clothes. As I understood, Serena Sky hotel exist only in my Booking papers. Of course, its exist in the island. And I found it later. But locals are very free and flexible  with lodging of tourists. If they have overbooking, they just put clients to another hotels. Its normal here. Propose some small bonuses like free excursion or one dinner or something else. When I spoke about our situation I received the answer, that we will stay in the best hotel on Thoddoo. Do we have more questions??? Really, the rooms were the best on the island. Its truth.

I tried to find the positive sides in our situation.

We are in the new hotel. Not near the ocean, but this is normal. No  one hotel on the island stay with ocean view and on  the beach – its only the question of how many meters to the ocean ( minimum is 150m). 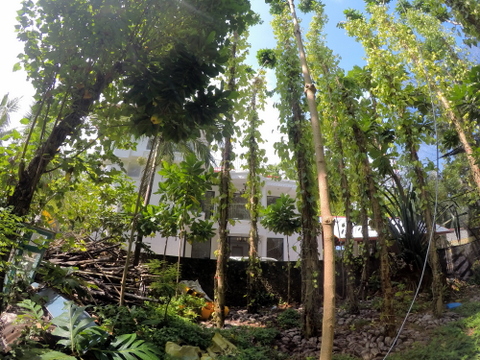 We have big absolutely unfinished terrace but with shadow and breeze during all day. 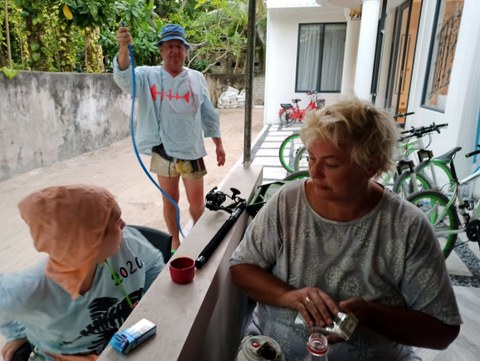 We are in the heart of the local part of the island. Here there are no tourists, only smiling local people. Supermarket is only few steps around the corner. 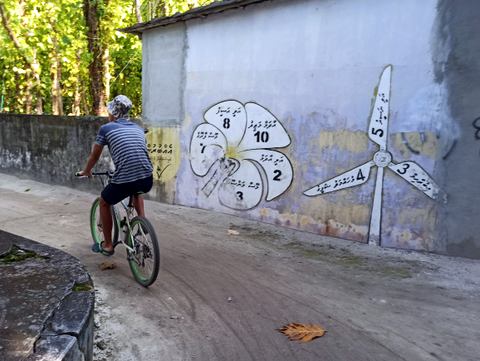 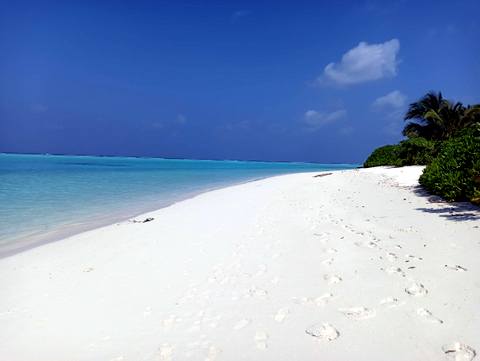 Strong wifi was in the hotel. First 4 days).

Our room was cleaned twice per day during first 5 days and then according to my demands. Not bad))

Papayas plantations were not far away. 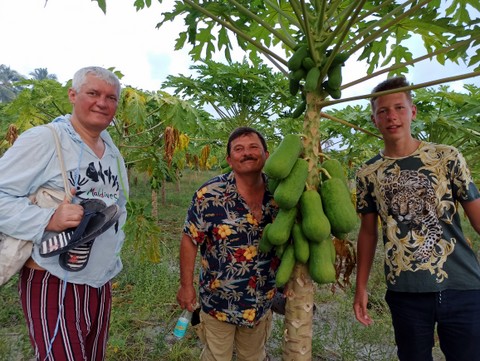 Harbor and another fisherman location for arriving with catch of the day were close. 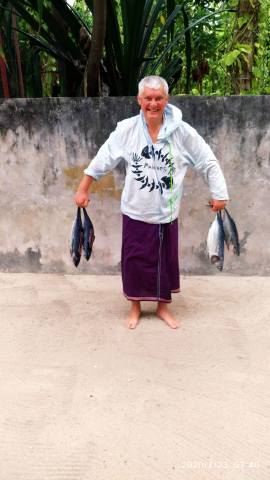 Black Anchor ( restaurant , popular between russians) was in 150m. We visit it only once.

Negative sides were – unfinished uncomfortable terrace and absences of the kitchen.

Mosquitoes lived everywhere and angrily bited us in the morning and in the evening. But its on all island.

The question of our displacement was decided with rented bicycles. 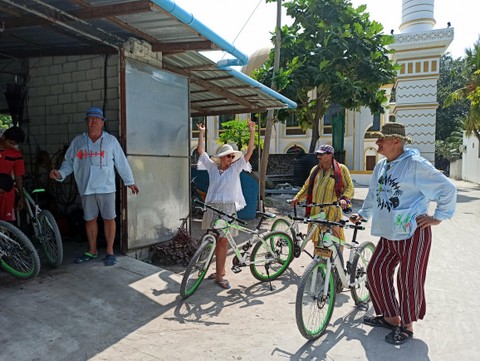 If you will be persistent, you can rent one for 4USD per day, not 5.  Bicycles with the basket are better. Some hotels have bicycles free for their guests. Kings Way hadn’t bicycles. This is negative point. Our bicycles were real technical miracle. It were extremely uncomfortable. Its seas all time turned during the ride and were as solid as the stone. There were no possibility rise the steering wheel higher. So, my position was awful. I put yoga mat on the seat and soften my life…. 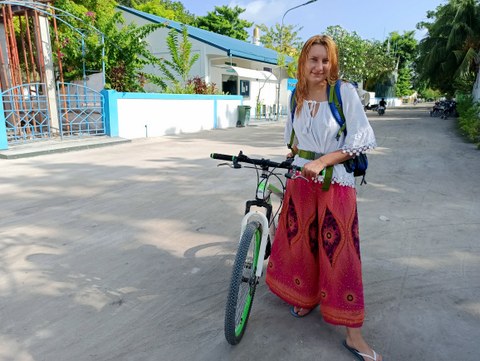 First one was not far away from the harbor. It was narrow, shady, with hammocks on the trees. 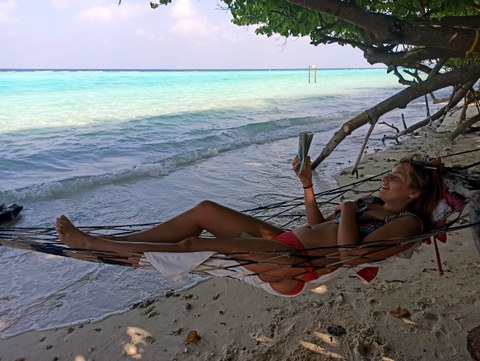 Water was very clear, reef not far away. During all day because of the constant wind it was very fresh on that beach. Sometime even cold ! For me… 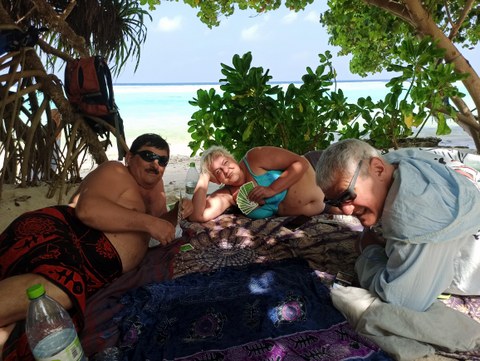 In the tourquise water there were single big corals or small corall conglomerates. All this was densely populated with multicolor fishes and morays. Current changed during the day and sometime was so strong that it was not possible to walk against it! 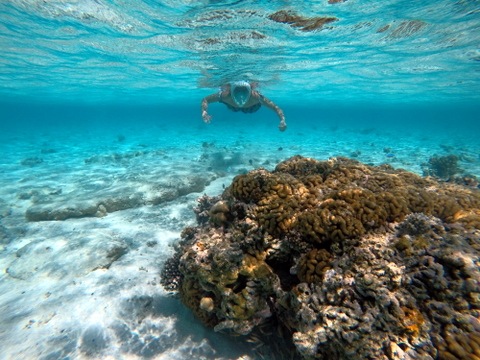 Near this beach were papaya plantations .

Second big beach, which is on every photo, long and wide, with sunset view, was on the opposite side of the island. 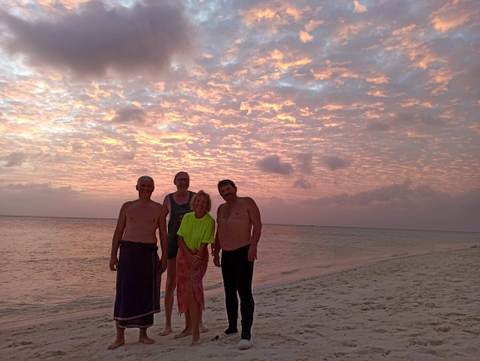 1,2 km between the beaches. May be less. Not long walk. Its awful during day time, between 12 and 15-30, when the temperature is high. At this time to be on bicycle more pleasant.

Big beach has toilet and showers with fresh water. And it was overcrowded. All shadow places were hardly occupied by Russians. They put theirs tables, chairs, small swimming pools ext.  And there was no sigh of wind. Fruits were sold near the entrance.

This beach has nature wonder – coral garden with big family of turtles. We come here after 4pm. At this time beach became half empty. Coral garden was just near the shore, not more then 20-30 m.  Hundreds of fish’s with curiosity come very close. 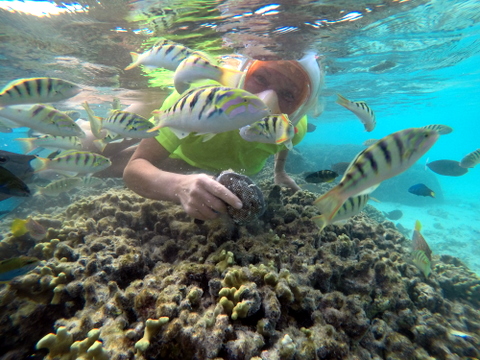 Unicorn all time like dog tried to look into my eyes. And turtles. Everywhere. Slowly picking corals. Then fly to another spot and again picking something. Ivan even saw five turtles! He turned the head and calculated : one…..five! 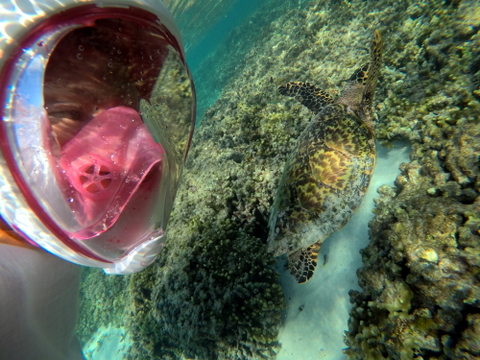 We also took pieces of bread. Fishes became crazy – they crowded, hustle and tried to bite me.  Small jaw cleaner started his job with my leg. He did it with love. He clean my leg! It was tickled.

This evening walks finished by sunset, but not every time. Usually we harry to start prepare dinner.

In the center of the island was the biggest mosque on Maldives. Its really beautiful construction. In the evening it has multicolor illumination. 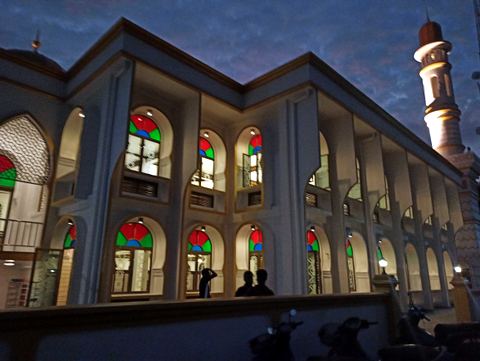 Its not only one mosque on the island. My wake up was with different voices of local mosques at 5am. But i liked their soft voices which sing suras from Koran.

Island has hospital, school, police station, a lot of supermarkets and restaurants. No ATM.  Everyone wants cash. Only one supermarket near the mosque accept cards. Hotel was forced to take card because we hadn’t cash in such amount. There are two ways to receive cash, if you need. First – give to someone whom you trust your card with pin when this someone go to Rasdhoo. Here its ATM. Withdraw cash +100 rupees (7usd). Or in the evening opposite the dive center , person from Russia bring card machine. You make payment + high% and person give you the cash.

As on Thoddoo a lot of tourists, here are also a lot of cafés and restaurants. We visited only one -  Black Anchor. Only once. Waiting for “already prepared fish” was more then 1,5 hours. They served plus minus in time only for those who make preorder.  Price for dinner was high. Cash only. Good buy. Everywhere long waiting, not tasty, high taxes and so, high prices.

From the second day we prepared dinners in the hotels kitchen of our friends.  We bought fish in the harbor early in the morning. 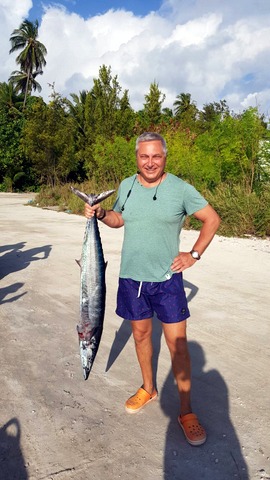 Our dinners were delicious. Everything we need its in the supermarket. Standard price for dinner with fresh fish, rise and salad not higher then 4usd…. And preparation was more quickly then in restaurant…. The only problem was to catch morning fisherman.

Ivan regularly went fishing. Harbor has outside stone fence. And during our stay it were all time big waves. First day huge wave  knocked him down into the water and he had big problems to get out from the water. That morning he returned completely wet, little bit scared and with numerous abrasions. 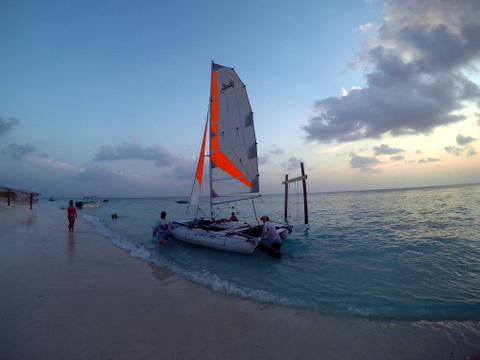 And papaya. Plantations and farming occupied big territory. Here on Thoddoo biggest papaya groves on Maldives. I  started to distinguish at least 4 types.

First time I  asked to buy fruits and farmer knocked down with the stick 3 green huge papayas. I paid 6,5 usd. It was at least 6 kg. We looked on green papayas. How long it must be in warm place to became ready and orange? No ideas. I put them on the balcony. They were ready in few days.

Every day we bought a lot of papayas from plantations. Mostly they had been green with few yellow spots. Orange color were in the supermarket – twice and more expensive. Green ones were ready in few days and also we made preparations to Rasdhoo. Next island wasn’t so luck – any plantations.  We took to Rasdhoo more then 20kg of green papayas and happily ate everything.

I made walks also between gardens with different strange for me plants. 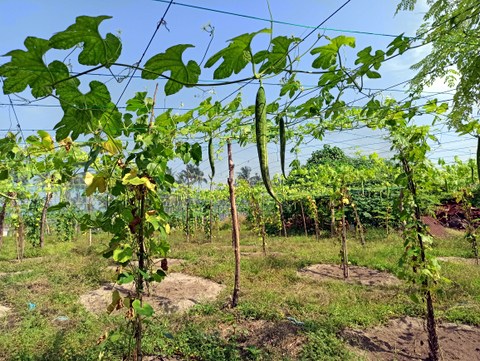 Everywhere I tried to ask what is it. But not everywhere i received the answer. After I know that mostly in gardens work people from Bangladesh. Locals don’t want. India, Nepal, Bangladesh – workers supplies to Maldives. Salary for non qualified works 300-800 usd + accommodation and food. Not so bad. I only recognized cucumbers ( but very big and watered as I bought them in the shop), pumpkin, water-melon, eggplants and mamordica ( carry plant). The rest was island  enigma for me. 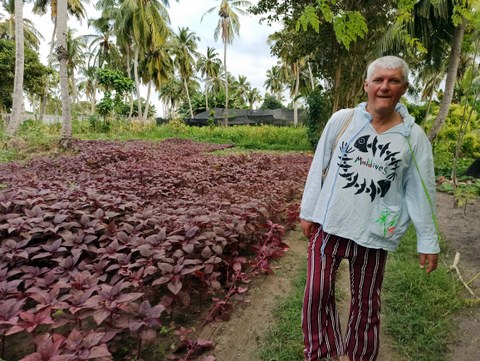 The day on Thoddoo was fully busy from very early morning till time to sleep at 8-30 pm)) Coffee with mosquitoes on terrace.

Fisherman Ivan at that time was already near the ocean.

Morning yoga on Shady beach. Of course I get there by bicycle. 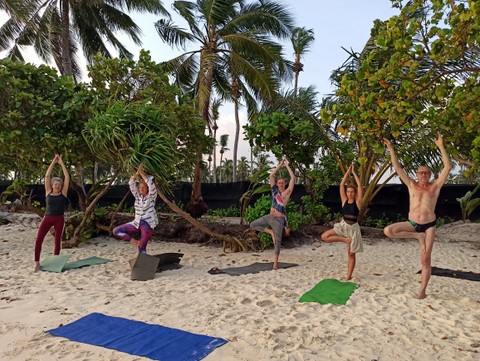 Morning swimming. Twice I made rides around the island early in the morning. Then breakfast. We had it not far away in the small restaurant. Maldivian or continental. No fruits. But we brought our own. 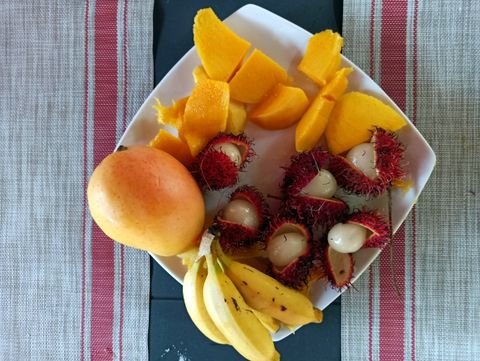 At 4 pm we moved to the big beach. Here from left side its an interesting coral garden with big turtle family. Every snork gave us connection with at least 20 turtles. 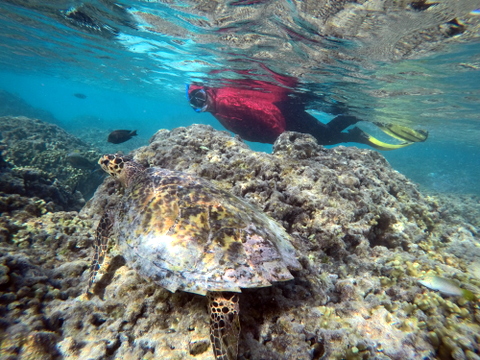 Then we brought simplest bread for fish. And became princesses of the ocean with piece of bread. It was funny to observe this crowd of dwellers which not only pluck the bread but also pluck my legs.

On Thoddoo also its a dive center with bright name Russian dive center. Another one is not open yet. German one. From the first day we tried to organize diving. OMG! No paper work. Its mean that you are not exist and you do not have DAN insurance. And of course, no taxes, what is more important for dive center. This is just note. No one ask your qualifications. Any ideas what time will be diving next day. That’s because they have group of techno divers from Russia. Big money. More important people. The only question is about depth and time – according to Maldivian law any dive must be not more then 55′ and not deeper then 30m. Techno??? OK. Money rules the world…. First morning we waited. In the hotel . Because of WiFi connection. No. Another people. Next morning we waited. Yes. Time was changed 3 times… But yes.

Dives were nice. In the begging Anatolii told us that mantas are all around. But then stormy weather came. And mantas disappeared. We made 6 dives here. Near Thoddoo and on Rasdhoo with sharks. 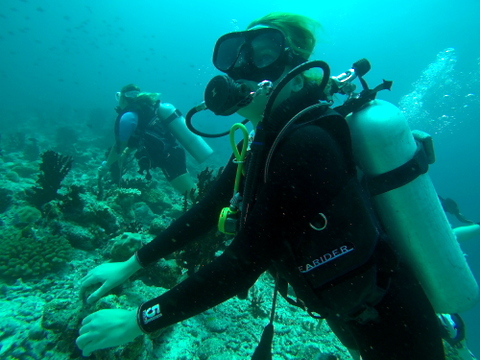 Thanks to Slovenian instructors. They did everything perfect. We left equipment in dive center because it was weak hope that mantas will return. If yes – we will dive. I was unpleasant astonished when in the morning of next day saw diving car with our equipment! It was served for another people! Our personal equipment!!! WTF!!! First time in my life i saw something like this! Next day Anastasia pick up her suit. It was wet. So, it was used. We collected our belongings and waited two days that they will be delivered to us. Payment in this place possible by card. Prices for diving are fixed. Nine days flashed quickly. Time to go to Rasdhoo. 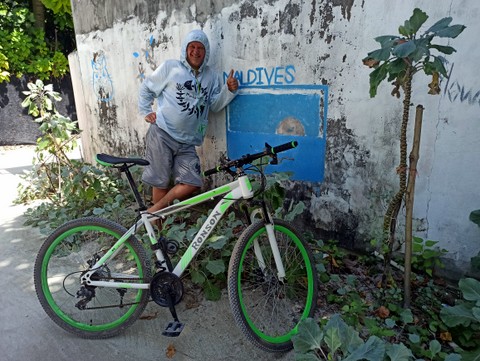