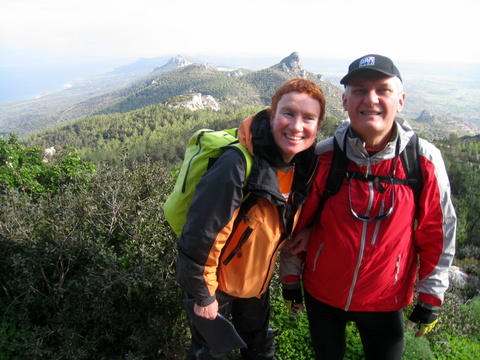 North Cyprus by bicycle
28 of December we arrived to Larnaca. The weather was warm. 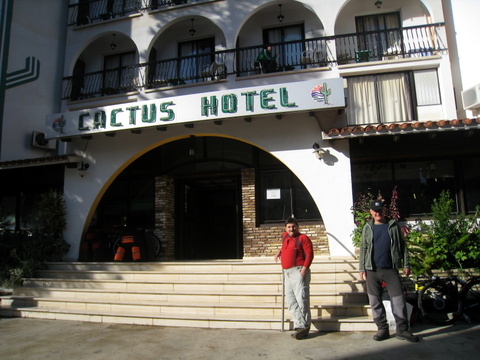 Next morning local women With whom  I had agreement put our 6 bicycles to universal,  our luggage and our 6 bodies to limousine and we start the adventure. Two cars to Dipkarpaz costs 300 Euros. It’s with airport transfer in Larnaca.

First we need to cross the border withTurkishRepublic  of NorthCyprus. It was not long. We just received stump in piece of paper, not in the passport.

In Famagusta we bought all food. We paid with Euros. Meat we bought in small Kiosk and fish in special shop. Total with water, as I calculated it was at least 60 kilos and little bit less then 200 Euros.
After Dipkarpaz Frida drop off us near the sea. It was area near small hotel. It was closed for winter time, but someone was inside. Old Kurdish  men work near new not finished building. 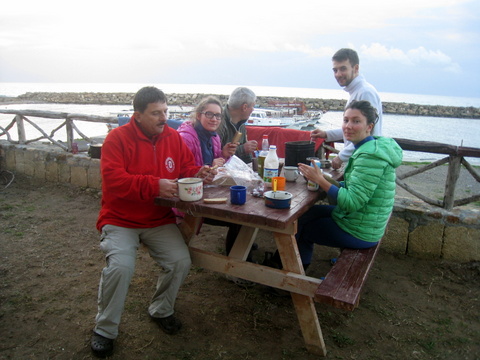 Evening must be very windy. We tried to find place for camp. men invited us inside not finished room and we agreed.
Sea was not cold and I swim little bit.
We prepared our fish soup. It was  sea bass soup. Delicious!

In the morning we start to pack our bicycles. Hard job!
2 hours we packed, unpacked, packed again.
As the result all was loaded. But I cannot by myself pick up my bicycle. With Ivan’s help I start to ride.
Ksusha and Tasiya tried to ride strait but it was hard.

The road was quiet, rear cars, no villages, green foothills, flowers, blue sea aside. We had been in Karpaz national park.

Slowly we moved along sea shore. Beautiful empty beaches. Small cafe with breathtaking view and strong Turkish Café. And St. Andrews monastery.
Unfortunately the monastery was closed for renovation. It was sunny day. 20 cats and 3 donkeys follow us hope to receive something. We sat on the warm marble stairs. Animals came closer. Then Donkeys put their noses into our bread and cheese. But we also hungry! 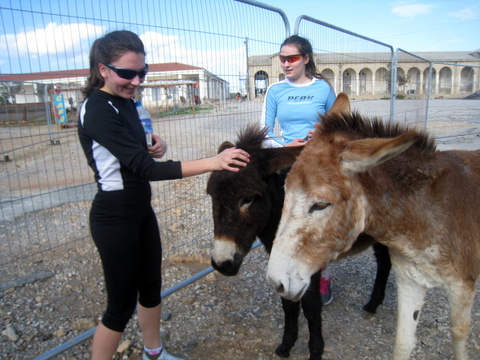 Group of Germans arrived with the guide. They bring big pack with bread to donkeys. We were free now. 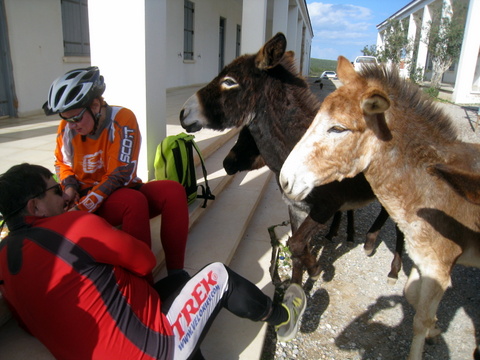 After monastery the road became gravel. But good quality. The sea was closer, blue, with beautiful small bays.

We get to the end of Karpaz and turned to the north road. 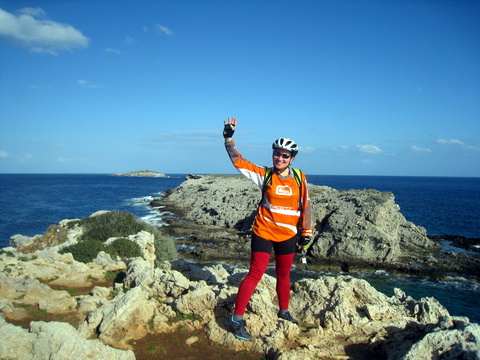 Here near the sea was only stone shore. No beaches more. In the middle Karpaz is hilly, with small bushes, numerous flowers and Wild donkeys. They were everywhere.

We get to Kornelia Islet. Here are two beaches. But one was full of empty plastic bottles and second was without good path. We choosed clean beach without path dawn and put our tents ahead. Not far away two donkeys cried.
There were a lot of wood for fire everywhere. So, our dinner was ready soon. 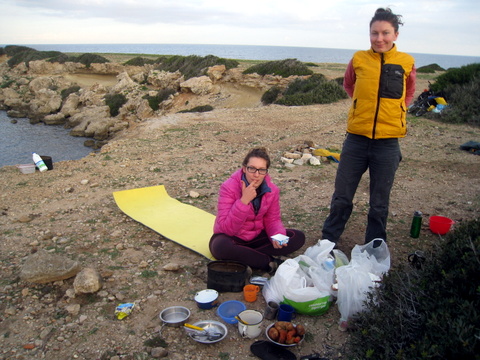 The night was quiet and warm.

Next day we again ride from East to west on the north side ofCyprus. The weather was excellent. It was warm and sunny. The road was not easy. It were few places with big uphill. And we push our heavy bicycles. 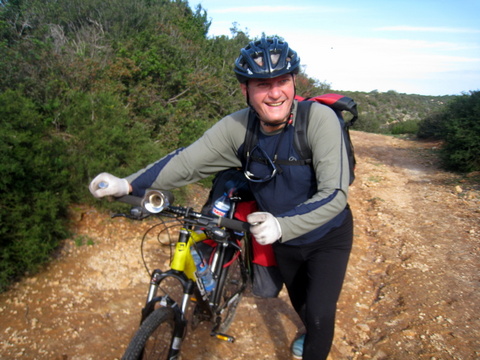 Something happens with my back tire. Camera burst. Second also. We found that tire has a hole. It was a problem, because we hadn’t spare tire  and to Dipkarpaz it was at least 20 km.

So,  we left children with broken bicycle and Hurry ahead. Today was 31 of December.

First by the way was ancient Affendric. Ruins of ancient churches, columns in high grass. And herd of sheeps. We had no time. We must hurry. 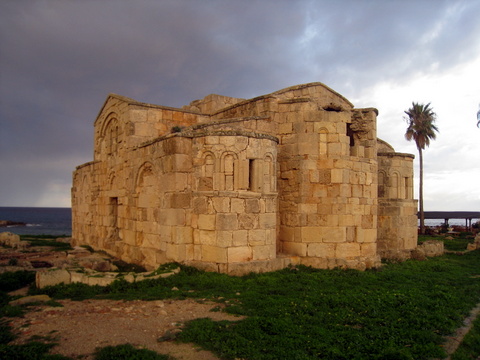 Then paved road bring us to Agious Fylon. Impossible!  Small ancient harbor, church,  rest of mosaics and small hotel hidden near the sea. Oasis. The  Jem. 20 Euros per person. With breakfast. And owner, who even didn’t listen full story about bicycle. He switch on his car. He was ready to help us.
We returned to Affendric to pick up children. But they already found the car!  It was only one car, which we meet during this days.

We prepared our New Year dinner and watched sunset. It was beautiful evening. Just light breeze and no more persons. 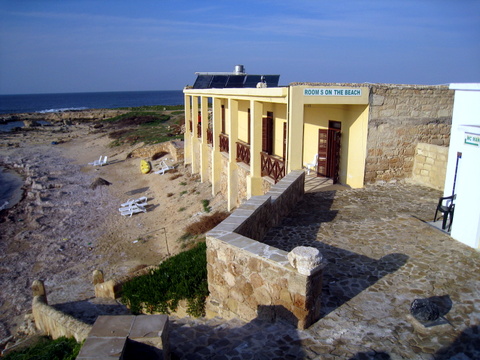 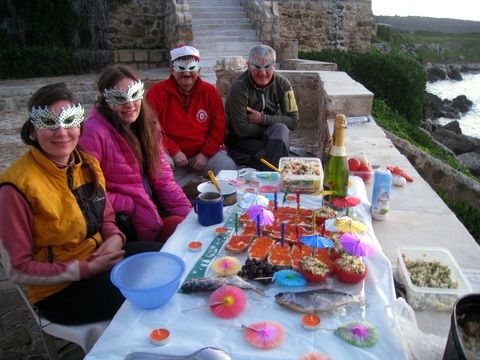 1 of January 2015 before the breakfast start heavy rain. Half of hour. Not more.
Owner of hotel found the place, were we can buy new tire. He agreed drop off us near Cantara castle. 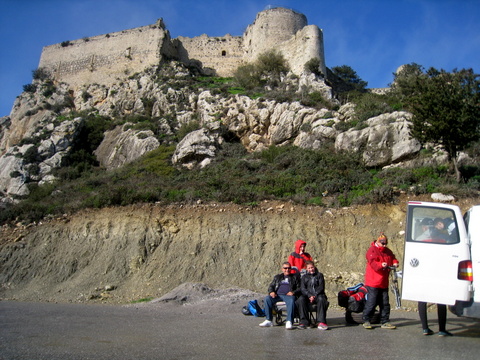 From Cantara till Bishbarmak we ride strictly on the ridge. The road was paved and gravel. One part I found only in Google. There were no signs to tern on it. But everywhere were marks- white spot with green dot inside.

Cantara is very special castle. The weather again was perfect and from the top we saw Peninsula Karpaz  and  both sides of Cyprus. 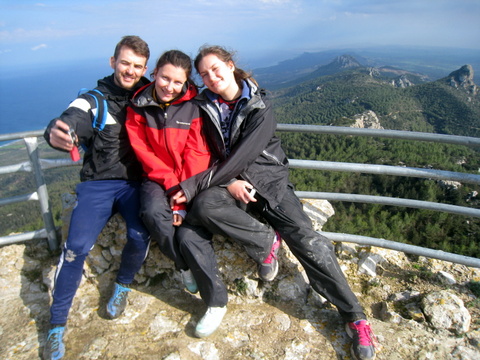 So we had plans to get to Antifonites. But it was not possible. With our heavy bicycles every uphill we made as slow as snails.
There were no water by the way. No people. No villages.
Not far Away of Mallidag we descended from the mountain. The road was bad -  clay and slippery if wet. 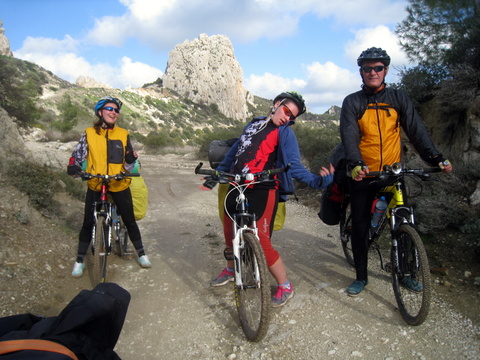 It’s became dark when we enter to Mallidag. We didn’t found tap water or well. So we asked person give us water.
This night we spent in olive Grove not far away from the village. 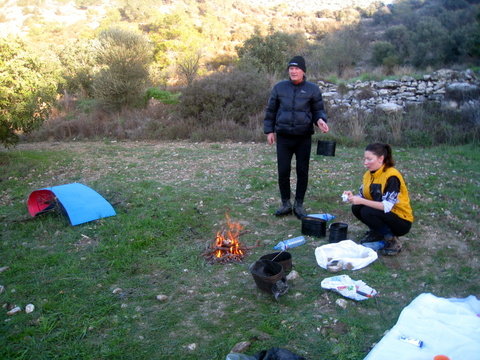 It was only 10 km to Antifonites, but mostly uphill. Our speed drop off to5 km per hour. And to get to Antifonites we need ride or go downhill 600 meters from main road. We hide our bicycles and follow the marks. Google know every step, every path. But here even Google didn’t show numerous pushed which exist in mountains. All paths are not only for bicycle but also for 4×4 cars.

Antifonites is an old church, which was loved by kings. It’s hidden in the mountains on small lawn, but from terrace possible observe big part of the sea. Because Antifinites was in private use, frescoes still visible on the walls. It’s too rear in Turkish Cyprus. 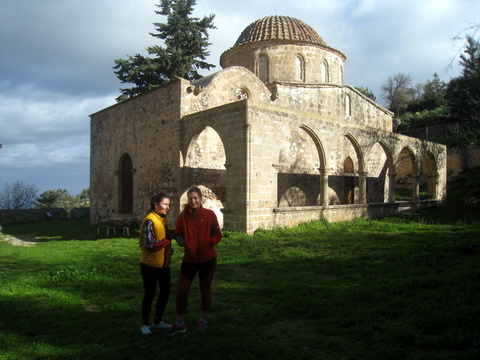 So, now we move to Buffavento. I snot sure that the way is right. Cyclamens stay to blossom  everywhere. We don’t want get to the top of the range. The weather around us became rainy. we saw that Gyrne is with have rains, rainbows were in the sea.  Then this front of rain came to us. Very cold rain. Strong wind. We moved ahead. 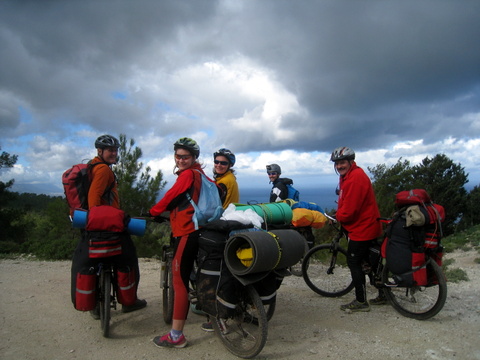 Then it was two roads — right to ancient Armenian monastery Magar and left, as I hope to Buffavento.
We turned left. After 300 meters it was a sign to local Tavern. It was miracle. Tavern was open, inside was warm open fire and mix kebab was served! During two hours we stayed in warm place with delicious food. The price say also pleasant — 100 Euros for 6 persons. With beer and whiskey.  Owner advised us return up 300 meters and color the sign to ancient monastery. The road he said is very beautiful,  mostly dawn Hill.  And we will receive the choose — turn to Bellapaix or ride to Buffavento. 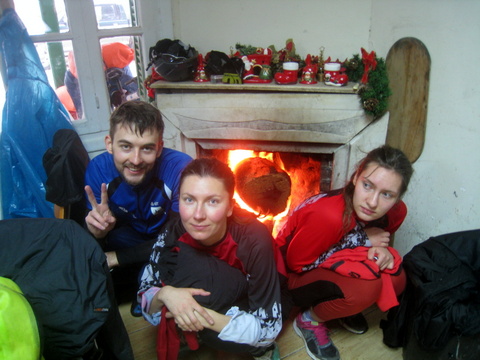 Rain was over. It was not so cold, but our speed increase and we put on more clothes.

Clouds and mist go away and we saw the sea,  range and Bishbarmak ahead. It was fairy!  We passed just near Bishbarmak. This peace of range is like sleeping dragon. 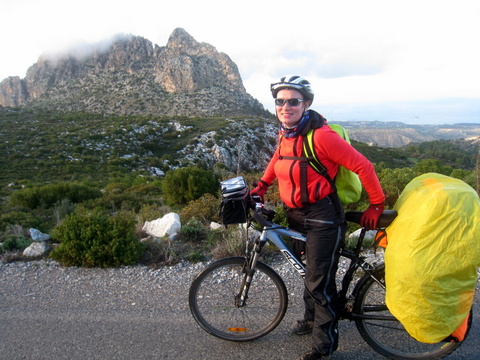 The time was 4 pm. Little bit more and it will be dark. We turned right dawn to main sea road and to Bellapaix.

When we had been in Bellapaix it was completely dark. Is left 1,7 km up Hill.  But when I saw degree of up I fill nausea. It was more then 30 degrees. It was difficult even to push our bicycles. My foots slipped dawn after every effort. I was dead.

Abbey appeared in the dark. Huge and mysterious. We asked few locals about BB, but they all said that we need to find hotel.
OK. Just near the Abbey was closed for winter time. One boutique hotel has enormous price. It was empty.
After one hour we found hotel. Just uphill the military zone. There were a lot of apartments here, great view, 17 cats, 3 dogs. 30 Euros pp with breakfast. 10 minutes after our arriving,  cold shower rained outdoor. It were lightning’s and rain all nigh.

At morning rain continued. It was  cold now. We took our huge breakfast. It was testy. We cannot stop. 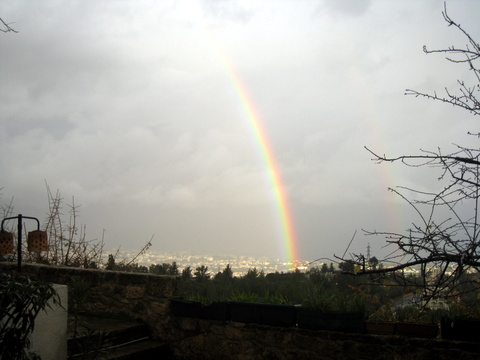 We waited till 10 am. Rain stopped.

Our first point was Abbey. Charming. Without anyone. With orange tree near entrance. 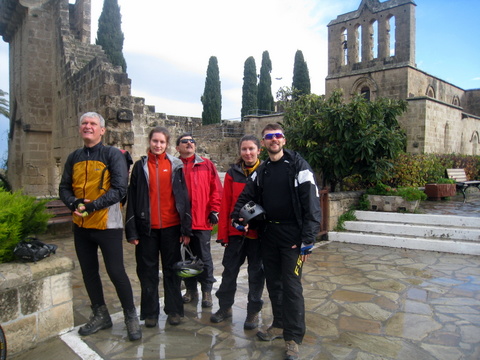 And then we ride to Girne. Mostly downhill. In half of hour we had been in Girne castle. Its  our last day with our children. They all sat in dolmush and in 2 hours had been in Larnaca.

And we repaired again bicycle. Made small promenade in charming Girne port, bought fresh fish, some food and follow to West. 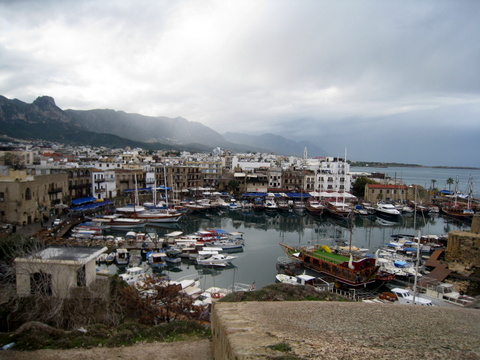 Here we had been in the main road. Awful. Traffic is hard, road is not wide,  soon will be twig light.  I think we can stay near peninsular, eastern from the  Girne castle.  But it was mistake. This peninsular was occupied by Turkish military. We were not allowed get there.

Our next attempt all failed.

One of the turns we found bungalows apartments near the sea. There were numerous cats, old men on reception. That’s all.
45 Euros and we received bungalow near the sea with two rooms,  kitchen and cats.
It was windy at night. But without the rain.

In the morning after big breakfast we made only 2,5 km. We left our bicycles near American University. It was foot of Gothic range. St. Hillarion was in visibility. Only10 km uphill. 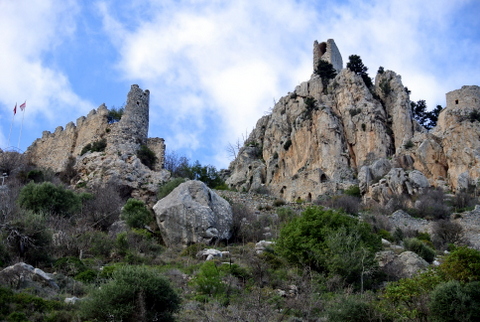 The road was quiet. No people. Clay.  Castle wed closer and closer. But we didn’t see the pass on last stone wall.  We would like to get to castle from left side. This pass exist. You can find it only when you get closer. Little bit more efforts —  and royal apartments appears. 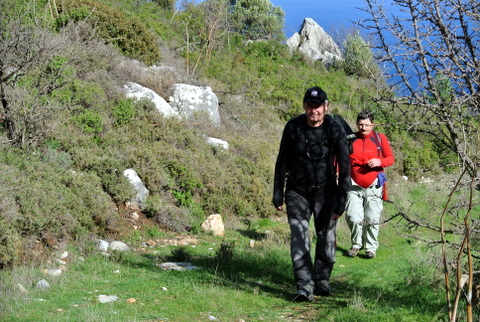 There were spots of snow near the castle.

The sky was blue. We had lovely day! 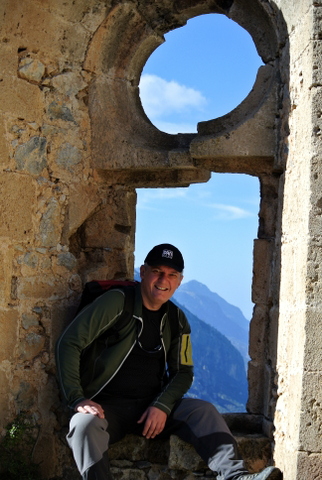 We returned back. I hoped to stay for overnight near Lambussa. This evening we understand that area between Girne and Lapta is very unfriendly for tourists and those, who want make camping. People cry that we need go away, some territories were closed by militaries. It’s became dark.

By the way we found hotel Manolya. 45 Euros in excellent room. Again with breakfast.

All night was rain. In the morning also. Forecast show rain all day long.
We asked manager find us transfer to Police in South Cyprus. Manager suggested visit Karachun peninsular.
So we did.
KarachunPeninsula is green,  very quiet, without any tourists. The most strange village  is village Karachun. This is only one Christian point inNorth  Cyprus. People here are maroonites. They help hide a lot of Turkish during so called Peace and Freedom operation (Turkey) and Independent war (Greek). They hide people during few years. And after 1974 turkey didn’t touch this village. They have big Dominican church, Greek signs. Their language is mix of Arabic and Greek. 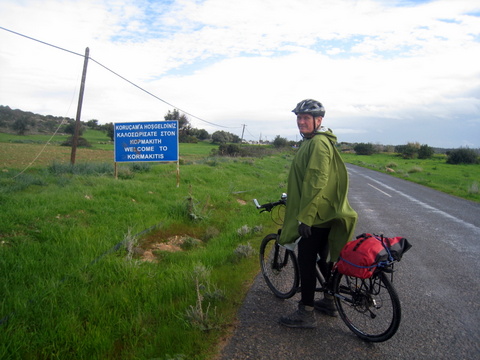 We didn’t get to Blue House. It closed on Monday. And we cannot approach. Blue House is on the military territory.

This day we made 60 km. As we returned, heavy rain starts again.

We made meat soup on the balcony. As usual on our small gas stove. Don’t think that we have rubbish and dirty everywhere. We prepare food with big accuracy. And always through away everything from rubbish bin.

Next morning big car pick up us. We visited Soli, Vuony  by the way. The road till Guzelyurt is up Hill and not interesting. Soli has mosaics and old theater. Vuony has great view. All this area is hilly and naturally unfriendly to bicycle. 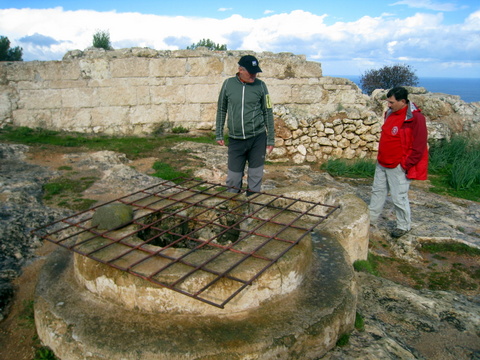 Then we crossed the border. Custom was more or less strict. They tried to find cigarettes and alcohol. In vain.

And again mountains. Up and down.