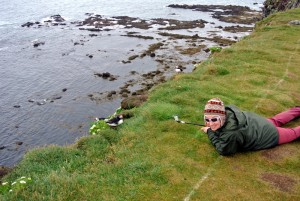 We arrived to Reykjavik at night. Picked up the car Hyundai Santa Fe and followed to Down Town Hostel.

Santa Fe is 4wd and its big difference in Iceland – 4 WD or 4×4. With 4×4 you can drive EVRYWHERE. But not with 4wd or simple car. Your insurance will not cover damages in inner part of the country and with roads marked F.

Downtown Hotel we visited last year during our trip to Greenland. That time it were big rooms and good facilities. Not this time. We had tiny room for 4 persons and price 206 USD.

Morning we bought little bit of food in 24 hour shop. Bonus – cheapest supermarket start the work from 10am.  Camping gas we bought on gasoline station.

And let’s go to Westfjord!

The weather was great – sunny day. With wind but not so cold. Lava fields everywhere. But we didn’t see volcano which produce all this.  Big flowers, glacier mountains, natural beauty.  Wild horses and sheep’s. Iceland sheeps every time have family of three persons. And no one has no ideas to whom belong  this creatures. They are alone ( three of them in most abandon parts of country). 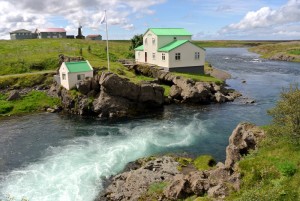 After not very long way we are on half peninsula Snefellsnes. With very mysterious volcano Snefellsjokull. There are seven energetic centers in the world. And Snefellsjokull is one of them. Jules Vern describe this volcano in his novel ” The travel to the center of the World”. It’s possible To get on the top with guide by snowmobile.

The first narrow slot in cliffs is Raudsfelgsgia (road 574). The cliff is huge and covered with moss. The top is in mist. We get inside the slot. It’s the pass there, may be 30-50 m. Most people stop before first big stones and small waterfalls but we get up and rich the waterfall 3 m high. It was our end of the road. 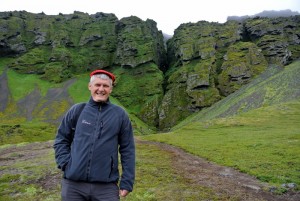 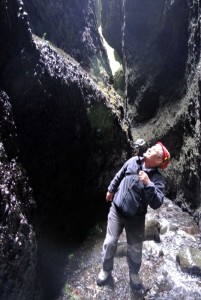 After few km the road 570 turns to Olafsvik. Somewhere little bit up are caves with graffiti. We found them. Just the cave with  stupid names. Nothing! But there was slippery and I fall and hurt my leg.

On the road 574 is tiny village Arnarstapi.  This is real jam!  At first, if you turn from parking to left you will be attacked by birds Kria. They cry loudly and try to touch your head. It’s not fear, as for me. It’s more funny. And I felt myself like in filming with great Hitchkok! 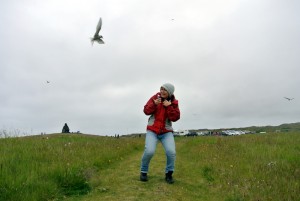 Near the ocean there are interesting formations of lave. After eruption basalt columns twisted in different forms and made sculptures everywhere, holes and grottos. This grottos are occupied with seagulls. Now they have nests and eggs in them. In this places, in Iceland,  people still collect eggs and catch birds for eating. But not seagulls, of course. 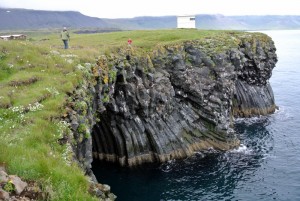 And there is also small harbor  here, with minuscule fishing boats and huge catch of the day – tree full containers with cod and something else. 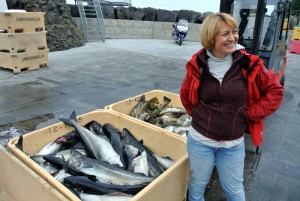 Next attractions near Arnarstapi didn’t astonished us.

We follow the way to our first campsite in Iceland in Hellisandur.

This place was fully equipped, with hot shower, hot water in taps, chairs, wooden tables, beautiful view and sun till  midnight.  We paid  something like 20 Euros for all facilities with electricity.

Next day was not sunny and warm like previous. We wanted to watch sea lions near light house ( Ondverdames)  and not ordinary sandy beaches. The road passed through numerous mysterious lava fields covered with moss. We waked up very early and had been near light house first. There were no sea lions, no seals or even signs of this animals. But the beaches before lighthouse were black color with lava and basalt sculptures. 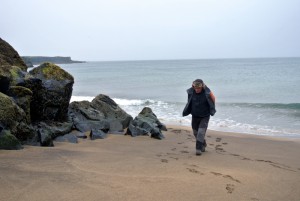 We saw Snefellsjokull only partly in the evening day before. And today volcano was completely covered with clouds.

Olafsvik.  This road was gravel, completely in clouds. Sometimes pieces of snow were higher then 3-4 meters. They appears near the road. 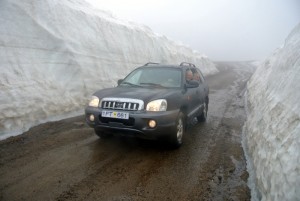 In Reykjavik we bought license for fishing in lakes and now wanted to try. But the road was so invisible, that our speed dropped dramatically and soon we understand that need to   be hurry to our ferry in Stykkisholmur.  It was drizzle outside the car and very cold. 4 C.

Near Stykkisholmur the weather suddenly changed. Rain stopped and sunny shines . This tiny city was really charming, with beautiful mossy rocks around harbor, seagulls and Library of Water. Library of water situate on the hill in 10 minutes from ticket office. This is simple building full of glass columns with glacier water.  Threw the columns you can see shore of Stykkisholmur, fjord and ships. 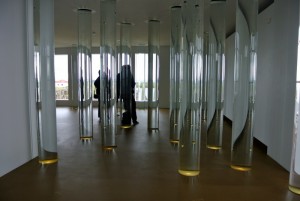 Our ferry was in time. It follows to Flatley islands and then to West Fjord to Brjanslekur.  Time to destination was more then I expected. It was rain, wind and cold at 7 pm, when we arrive to Brjanslekur.  The worst thing to do in such a weather was to make camping.

We turn on West direction. In Westfjord there is interesting thing – Water Trail. There are numerous natural pools. Sometime they are very close to ocean, sometime hot or normal temperature.  They can be free or for little charge.

After 20 or 30 km it was the sign ” Hot pot”. It was Birkimelur. We asked about lodging.  It was only one room for 4 persons with shared facilities. There were 8 more tourists in one building. The owners, young couple, told me that they are here only in summer period during their vacations. Normally they live and work all year in Reykjavik.

Morning was misty and rainy again.

We tried to find famous yellow beaches  Raudasandur ( road 614), but  on descent turned right and ride till the end of road. Here were 2 houses and green field before the ocean. Enormous number of birds hide in the grass. They all cry loudly and flight near us. At the end of field was long water bar and only after it starts yellow sand. Water ahead wasn’t deep. But it was so cold and windy outside that we just turn to our car.

Next point was Latravik ( road 612). This place was mentioned by National  Geographic like one of the best places . And it really was!

The road to Latravik like snake – up and down . Paved. Beaches look like Mediterranean. But water is extremely cold and air also.  Before Latravik  it is camp site without shower and kitchen.  Only toilet. And if the wind will be from sea it will be awful camping- there is no place to hide. 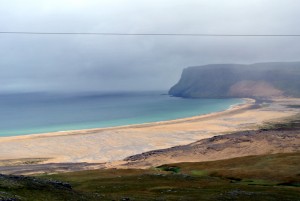 On Latravik there were a lot of people but at that time we hadn’t been yet in Gulfoss or Geisir and don’t know what mean people when said – a lot of people. So, it was bus and 10 cars. Latravik is high cliff with lighthouse. On this cliff numerous birds make their nestling. And puffins also. They make holes in terrain in upper grassy  part of cliff. Puffins usually sleep in the sea. They flight very quickly and make 300-400   wing flaps per minute.

In this place puffins are not afraid of people. People do not catch them for puffin steaks. In other places people do this and you cannot approach closer then 20-30 meters. 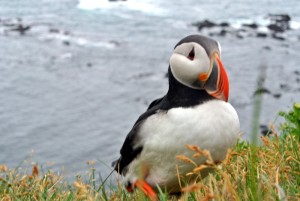 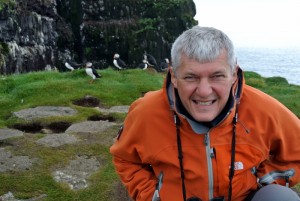 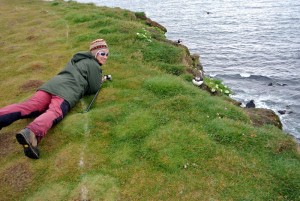 Not in this place! I lay on the edge and watch the birds. They were just in 20-30 centimeters. I can touch them! They were small and funny, moved like penguins, knocked each other by bikes, and drifted near cliff in strong wind.

We stay there for long time and I get to car with filling that its not enough for me 1 or 2 hours to be here.

But we need to go farther to explore Iceland.

We moved inside fjord and get to waterfall Dynjandi ( road 64).  By the way we passed mountains with snow or vegetation, big spots with green moss, flower fields ext. the road became gravel and we cannot move so fast.

We passed tiny city Bildudalur which is the most sunny city in Iceland. And today it was true – all around was rain and wind and it was good weather in Bildudalur!

We had been near Dynjandi only at 7pm. It wasn’t dark. Sunset now after 1am for very short, even invisible moment)). Dynjandi is quite big and strong. It has strange configuration – wider and wider from top to bottom and then cascade of waterfalls with incredible green moss.  It’s high with all waterfalls 186m and there is a trail from right side. Every step gave us new views. 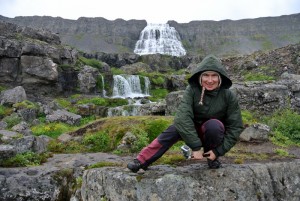 Just near Dynjandi there is camping area but with toilet only.

It was evening and cold. We want to get into Water Trail and to find guesthouse. Dreams about tent made us much more colder))

We found small village Djupidalur on road 60 near Reykholar with thermal pool. When we arrive there it was 11 pm and so cold and windy!!! In this village was only one guesthouse and it was full. But owner proposed to us full house for 60 Euros totally and hot pot free. Hot pot was in separate building and had indoor and outdoor parts. And shower with hot water as well. It was something special – hot tube in cold air and mountains around… This is the happiness!